‘What’s the Story?’ Collective led a four-year project (2007-11) exploring power and policing in Dublin. Born from existing relationships developed in the Rialto Youth Project, the collective was established to push the boundaries of collaboration between young people, youth workers and a resident artist. Their practice became focused on an intense exploration of power, both in their collaborative relationships and their individual lived experiences. Central to the process was a collection of personal anonymous stories, which formed the bedrock of all work.

Over time, the gathered stories moved from private to public in a series of events staged in community spaces and contemporary art venues. This included two participatory reading events, two films and a mobile cinema which travelled nationally and internationally, culminating in a major exhibition and residency Policing Dialogues (The LAB, 2010) which brought together young people, youth workers, educators, academics and members of An Garda Síochána in an active exploratory space committed to exploring and testing power relationships. 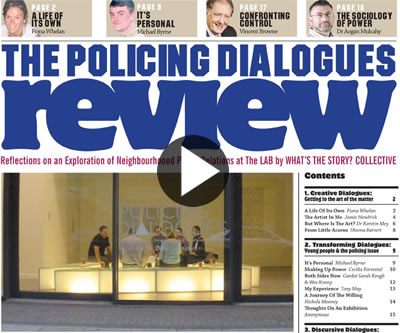